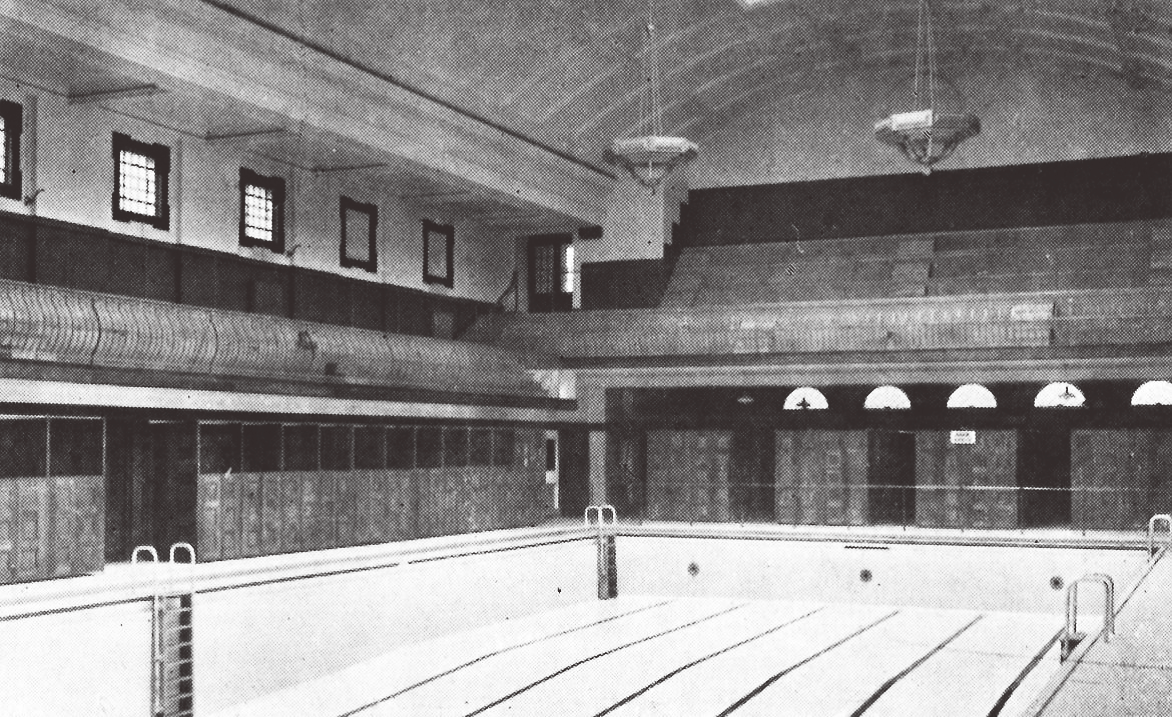 Original Turkish Baths built on the Northumberland Road site the site by John Dobson in 1838 at the cost of £9,500, originally as a private operation. 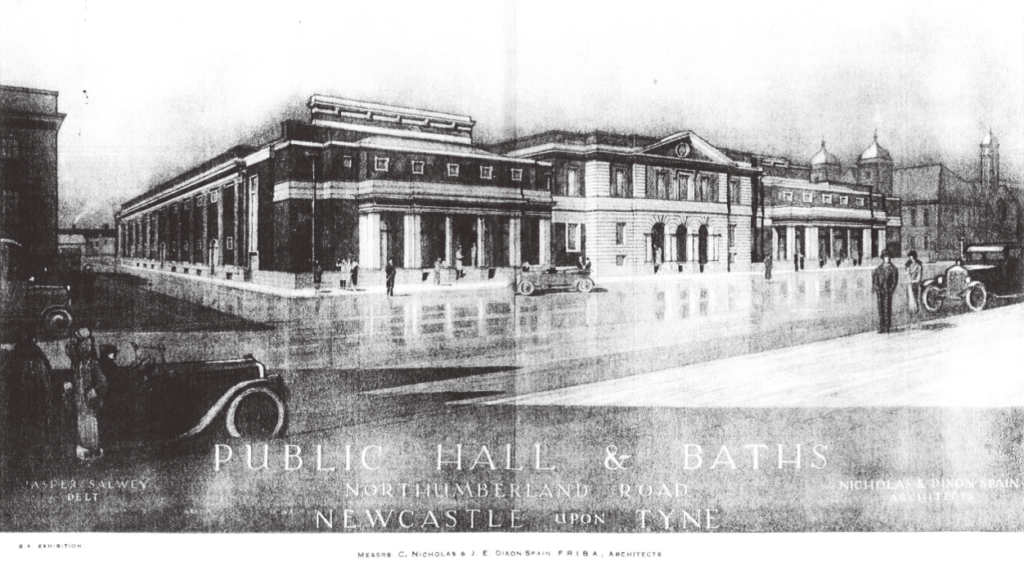 The current Newcastle City Baths and City Hall were built in 1927 and opened in 1928 to replace the original Northumberland Baths. Designed by Nicholas & Dixon-Spain who won a design competition. The provision of Turkish Baths was key to the plan, as was providing Newcastle with a good quality concert hall in the form of City Hall.

Mercedes Gleitze, a British pioneer long-distance swimmer known for open water swims including the English Channel, Strait of Gibraltar, also carried out a series of endurance swims in corporation pools, gradually increasing the British record to 47 hours.One of these events took place in the Northumberland Pool (now known at The City Baths, Newcastle) over 41.30 hours on 24 and 25 October 1930. In her archives there is a photograph of her and the incumbent Baths Superintendent, Mr Edward W. Priestley, taken on the steps leading into the building. Photographs from the Gleitze archives, courtesy of Doloranda Pember. 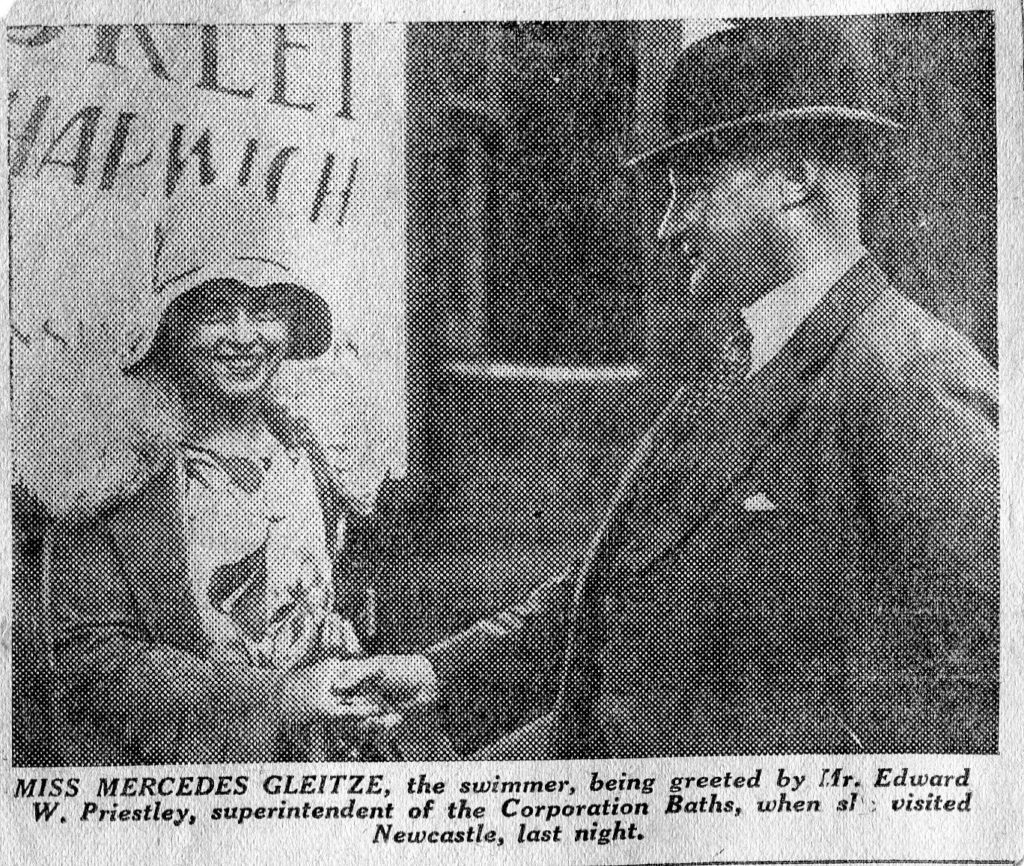 During the winter months the pools were covered and used for dances, boxing matches and other public events.

Northumberland Baths and City Hall were listed as Grade II listed building, with aspects of it Grade II* listed for historical and architectural interest.

The smaller of the pools become under threat as Newcastle City Council looks at developing the Vine Street School site, and the smaller pool into a My Place youth centre scheme. Opposition comes from older swimmers at the pool who used this smaller pool for aquafit. This group petitioned council meetings wearing home-made ‘Save Our Pool sashes’. However the My Place project proved not to be financially viable and did not go ahead.

Two conservation plans and reports done for Newcastle City Council by North East Civic Trust detail the architectural and heritage significance of the City Pools and Turkish Baths and lay down guidelines of how the features of the buildings should be maintained. The Grade 11 listed Turkish Baths are particularly important from a heritage point of view, being one of only 13 remaining Turkish Baths in the country with only 10 of these remaining open to the public (at that time).

The Baths ARCHITECTURAL significance is HIGH, and are one of only 4 listed 1920s baths in England. In the region is it more intact that the other 3 listed baths.

The HISTORICAL Significance is HIGH, it contains one of only 18 (at the time, now estimated to be 13) Turkish Baths still operating in Britain (of which only 7 are listed).

Newcastle City Council proposes a raft of budget cuts affecting many services and provisions across the city, including the closure of Newcastle City Pool. Protests, and swim in events are organised to demonstrate how well used and loved the City Pool and Turkish Baths are to be the people of Newcastle. 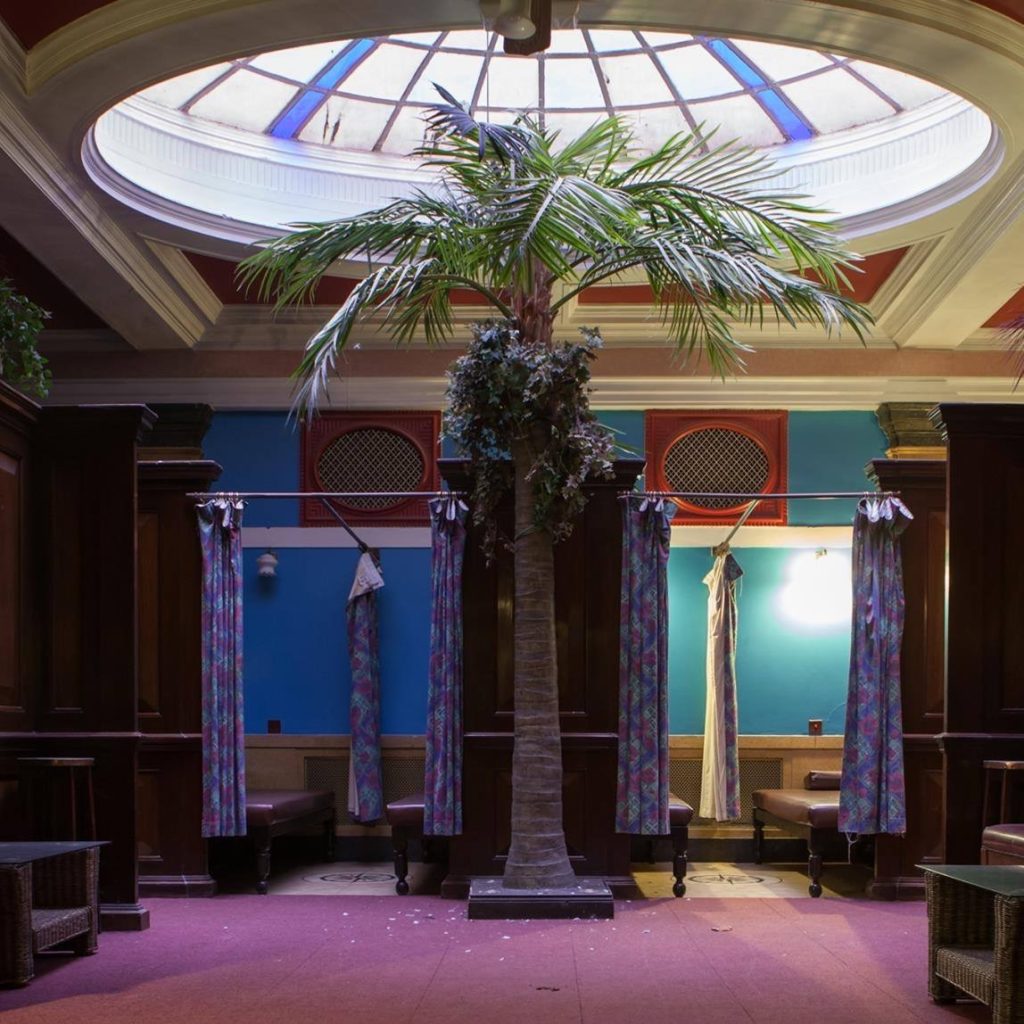 Newcastle City Council close both the Newcastle City Pool and Turkish Baths for public use, just 22 days after the budget was ratified by the council, without exploring other options to keep it open such as improved marketing or a community trust. Protests and farewell to the Baths and thanks to staff from regular users of the City Pool and Turkish Baths on the last day of public swimming.

Save Newcastle Turkish Bath groups receives £10,000 grant from Social Investment Business to develop a pre-feasibility study looking into the possibility of re-opening the Turkish Baths. 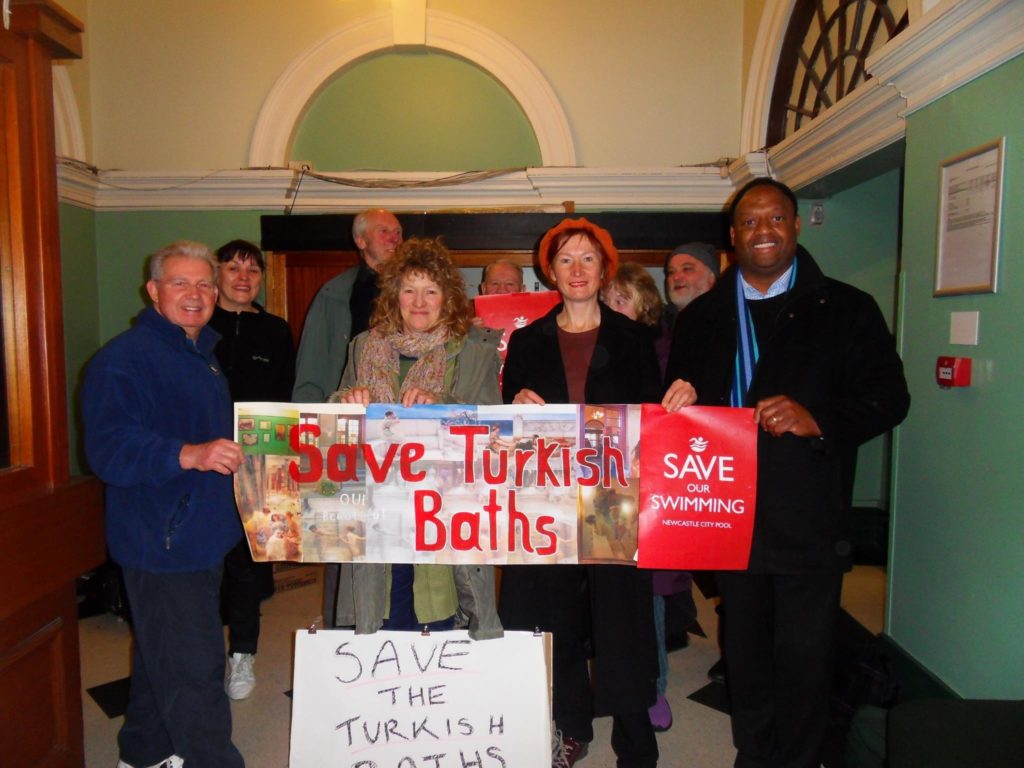 Save Newcastle Turkish Baths gets confirmation of the listing of Newcastle City Pool and Turkish Baths as an Asset of Community Value, which recognises the importance of the asset to its local community, as part of the Localism Act 2011. It also means that should the building be put up for sale, community groups will be given six months to develop a bid for the asset.

Save Newcastle Turkish Bath groups receives £10,000 grant from Social Investment Business to develop a pre-feasibility study looking into the possibility of re-opening the Turkish Baths.

Newcastle Turkish Baths group works with Jesmond Community Leisure drawing on their experiences to assist in writing a business plan to present to Newcastle City Council to bid for the site.

Newcastle City Council put the whole City Hall, City Pool and Turkish Baths building, along with Vine Street School on the market to invite offers on its use, as part of its policy to divest itself of costly building assets.

As the City Pools and Turkish Baths were listed as an Asset of Community Value the Moratorium was invoked, which means that we (and any community group) have until 2 August 2015 to present a community bid for consideration by Newcastle City Council (but they have no obligation to accept our bid at the end of the process).

Fusion Leisure, working in partnership with us were confirmed as the preferred contractor to redevelop and restore the City Pool and Turkish Baths building on a 125 year lease, with the City Hall to be managed by Newcastle Theatre Royal.

Newcastle City Pool and Turkish Baths hosts a meeting of the Historic Pools of Britain group welcoming representatives from pools campaigns across the UK, on National Sporting Heritage Day. 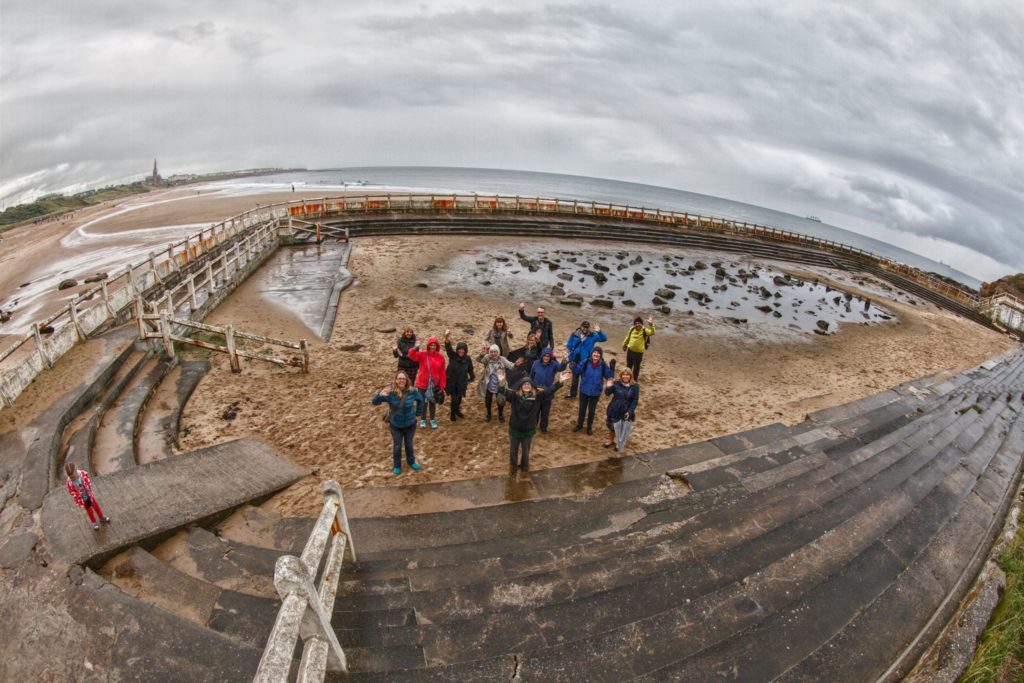 The campiagn group receive a grant from National Lottery Community Fund to rebrand into The Friends of City Baths, Newcastle as their campaign is successful and the Baths are due to re-open. 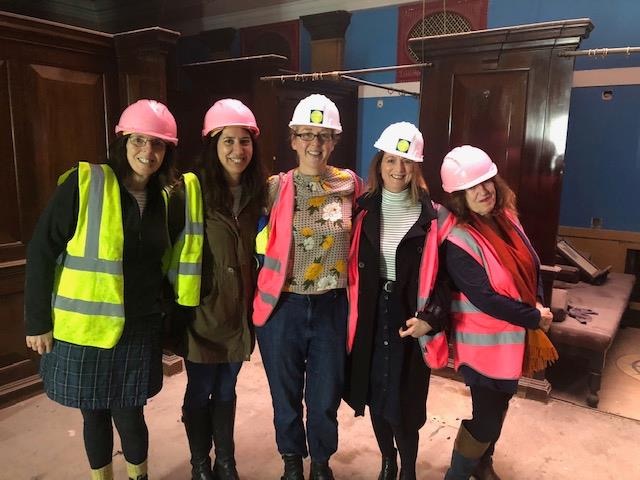 Re-opening as The City Baths, Newcastle with the original 25 yard swimming pool restored, plus a new poolside sauna. A new gym complex and fitness suite occupies the ground floor, located above what was previously the larger pool (which remains intact underneath). The restoration of this Grade II and II* listed building by Fusion Lifestyle cost an estimated £7.5million. The Turkish Baths in the basement are due to open shortly afterwards. The campaign group changes into The Friends of The City Baths, Newcastle 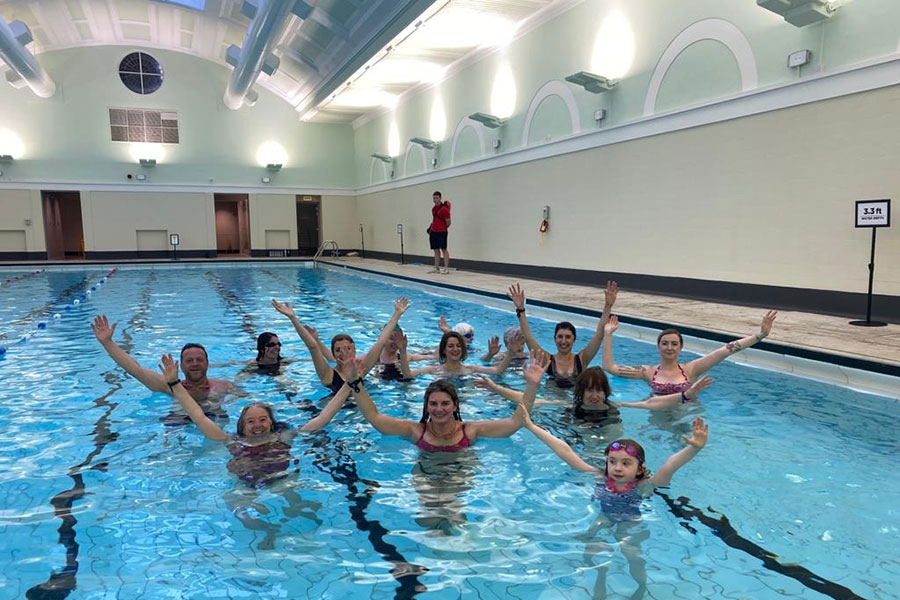 We are also grateful to the history of the Newcastle Turkish Baths provided in the 2010 Conservation Report prepared by North of England Civic Trust.